That was a month that I am not going to want to remember for a while. I had been with my company for 13 years and this month along with two others I was made redundant with my boss and the other engineer. There is another positive lead that I am following up on, but still a bit numb and shell-shocked. Somehow managed to read 18 books though and there were these below:

This is Malachy Tallacks debut novel, set in a valley in the bleak but beautiful landscape of Shetland. It is not a dynamic plot, just a natural tension between the characters and their interaction.

It has been a long while since I climbed a tree, but in my childhood, I spent a fair amount of time climbing and occasionally falling out of trees. But in this book, Aldred takes climbing trees literally to another level. An enjoyable account of a part of the wildlife filming side that you don’t get to hear about very often.

Sleep is one of those things that we do as humans that until recently no one has really understood why we do it. But according to this well-written science book, it is a key element of our health and well being. One for any science buffs TBR.

Having lost everything bar a small amount of money, and with the diagnosis for her husband of a terminal illness, Raynor Winn and her husband decide that they might as well buy a tent and camp, and if they are camping then they may as well walk the 630 miles of the South Coast Path. It is a great life-affirming book.

Mary Monroe lost her father when she was 18; until that point, she only knew him as dad; but she heard from an aunt that he was one of the greats of World War II. She had to find out more, and this is her tribute and story of his life.

There is only so much crap people can take before they have had enough, and Solnit in this picks up on the stories of five decades of activism against the state. It is a little dated, but she is such a good author that it is still worth reading

One of the defining characteristics of humanity is our curiosity. In a world where you have almost unlimited knowledge at your fingertips then it is so easy to take everything for granted. Henderson thinks that this is something that we still need to retain, and this book sets about opening your eyes to the wonders that still exist. Beautifully produced too.

At the age of 12, Lev Parikian was an avid birdwatcher. He had a huge list of birds from the common or garden to the exotic neatly ticked off. Except he hadn’t seen some of them, in fact, he had probably only seen half of them. When he decided to revive it, he realised that he needed a target to aim for, and after consulting with a friend, plumped for 200. This is his story of that challenge. Really enjoyed this and laughed all the way through.

If someone was to ask where to see eagles, you’d almost certainly suggest Scotland. But a while ago there were eagles on the west coast of Ireland too, and their ghosts can still be seen in the names of places in the landscape. Lysaght decides to spend time seeking their eyries by walking the wind and storm-swept landscape. His prose is beautiful and this is another cracking book from little Toller

Snow? In the summer? It sounds like climate change gone mad and given the weather recently it could be quite feasible. However, this is more than that, Nicholson is seeking the pockets of snow in the highlands of Scotland that last deep into the summer and sometimes surviving until the next winter. Lovely book with some haunting beautiful photos of the snow cathedrals he finds.

The benefits of getting outside in the natural world are only just starting to be understood, and Nick Baker in this book suggests some things to do to engage your all senses. Not a bad book.

For most people science is a big scary thing that they last did at school, but as Cooper explains in the book, anyone can be involved from observing birds in your garden on a weekend to searching the skies for new stars and galaxies. Lots of ideas on how to get involved. 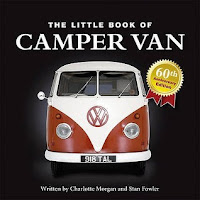 As style icons go there are not as many that are as cool as the VW Campervan and this little book gives a brief overview of the evolution of them so far. Nice photos, but no depth

The newest nation on Earth is on the Antarctica Peninsula, a place that has now been made habitable by global warming, rising sea levels and the advent of ecopoets. These genetically modified humans had special adaptions to cope with the extreme cold and climate at the far south of the planet. This alternative future by Paul McAuley has a thriller and family story dropped onto it. I liked it, but the thriller elements were too predictable as ever.

Dixe Wills latest book in the ‘Tiny’ themed series is all about the small-sized attractions around our island. From the museums in telephone boxes to the tiny public squares in the very centre of London, the smallest theatres and smallest pubs then this is the book for you.

Life on the open ocean is harsh relentless and unforgiving. To survive there takes resilience and millennia of evolution. Seabirds are masters of this environment, relishing the storms that drive the vast ships to save havens. In this book, Nicolson writes about at ten of the greatest seabirds and how they are coping with climate change and the devastation we as humanity are wreaking on the oceans. Fascinating stuff.

This is a bang up to date contemporary story set in a sleepy Scotish village, but there is more to it than that, there is a mystery, secret and it is very eerie at times too. Excellent debut

Rambling has now reached the grand total of 36 series and on there Clare Balding has walked with all sorts of people in locations around the country. There are stories of her time at the Olympics and other sporting events. Very funny at times it is just good fun read.