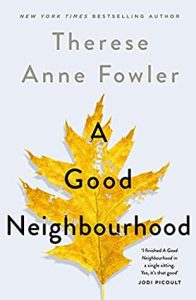 Valerie Alston-Holt has lived in the neighbourhood of Oak Knoll, North Carolina for a number of years. She was widowed a long while ago and has raised her biracial son, Xaiver alone. He is musically very talented and has secured a place at college in the autumn to study music.

Her new neighbours, the Whitman’s, have moved into the newly built house next door. Brad Whitman is a well known local businessman who has made his money by offering top quality customer service from his company. He is married with two daughters and it seems like they have a perfect lifestyle and marriage.

Their relationship seems cordial to begin with, but when Valerie realises that her magnificent oak tree has been damaged by the new building work next door she decides to sue the builder and Brad Whitman for $500,000. The good relations that they had just started with, end abruptly. What none of the parents know is that their eldest children, Xavier and Juniper have started to fall in love and everything that each family had built and strived for begins to unravel.

This book had a bit of a slow start as Fowler sets the scenes in each house and the context of the predominately white neighbourhood, the book group with the barbed gossip beforehand, women who are at home as their husbands work and the monied class differentials between Valerie and all the others. She is using this book to look at some of the issues of nepotism and corruption as well as the conflict that the Americans have between class and race. However, the last quarter of the book is where the predominately white Fowler unleashes the main elements of the plot and takes this from a family saga to a high stakes thriller and it was much better than I was expecting.