A Hat Full of Sky by Terry Pratchett 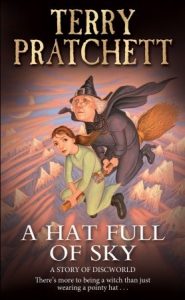 There is a time for every child to leave home and move on with their life, for Tiffany Aching she is going to become an apprentice witch to the elderly Miss Level. She is to be taken there by her former teacher, Miss Tick. While they are waiting for the elderly witch to arrive they are attacked by an hiver, an ancient and truly horrible thing, which can’t die. They survive but are shocked by the experience.

What she doesn’t expect when she gets to Miss Level’s house is that she has two bodies and a very tidy ghost who tidies the home for them. She joins the local coven of apprentice witches, while she gets on with most of them, she struggles to get along with Annagramma, the self-appointed head of the group. She heads back to the cottage.

It is there, while she is resting, she steps away from her body one day. The shell left temporarily behind is an ideal place for other things to take over like a hermit crab and the hiver is waiting for that opportunity. Even for an experienced witch leaving your body and stepping away from it is fraught with difficulty and danger. Tiffany Aching doesn’t fully realise what has happened, but with the hiver in control, she starts causing chaos. Rob Anybody, who is one of the Nac Mac Feegles, senses that something is wrong and he sets off with his band to see if they can help in their own indomitable way and rid Tiffany of the hiver occupying her mind.

This is the second of the Tiffany Aching books and Pratchett has written another well thought through book. The characters are engaging and there are the usual laughs all the way through the book. If there was one tiny flaw, it did feel that the final scenes were a bit rushed, and I would have liked to seen a slightly larger role for the Nac Mac Feegles, as they were still hilarious, but other than that I loved it. It does feel like the interplay between Aching and Weatherwax is the beginning of a long partnership, and that her power and experience is slowly being passed to this young witch.