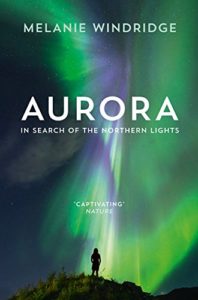 I don’t have a bucket list, (do have a bucket though), but one day I want to see the amazing natural phenomena that is the aurorae borealis. The haunting beautiful lights that hang in the skies of the northern hemisphere also have their south equivalent, the aurora australis. They have been known to humanity for millennia and have been a sense of wonder and inspired stories and myths of their creation. However, it is only in the past few decades that we have become to understand how they are created.

Melanie Windridge’s work as a plasma physicist means that she is well placed to reveal all that has been learnt about the science behind these beautiful lights. As well as a clear explanation behind the science of the northern lights, Windridge head north to experience them for herself. Her travels take her from Scotland to  Iceland, then Canada and onto Svalbard, where she sees the magnificent total solar eclipse. Also woven into the narrative is an exploration of the cultural effect that the light has had on the people that see them and how we have tried to replicate them and explain them before science.

This is a really nicely written book about the aurora. The science behind it is incredibly complex, the source of the energy comes from the solar wind and coronal ejections from our sun and the light is produced by the interaction between that and the trace elements in the upper atmosphere. I liked the blend of science, travel and history too; it shows that things should not be considered in isolation. The book had so photos of the auroras and her travels, but it would have been good to have more. Interestingly, you can see a certain amount with the naked eye of the aurora but when you take a photo then the true splendour is revealed.