Blood on the Page by Thomas Harding 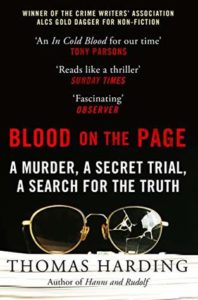 In June 2006 police were called to search the home in a road in Hampstead. The reclusive owner, a writer called Allan Chappelow, had not been seen for a number of weeks. The house was borderline derelict, it had an overgrown garden, trees growing inside the building and piles of rubbish in every room. They searched, but could not find anything, but a couple of days later returned with a police dog and then discovered that there was a body in a room underneath half a tonne of papers. What began as a missing person inquiry was now a murder inquiry.

As the murder inquiry began they had no leads on what the motive might have been and who the killer might have been. As the leads developed they found that bank cards and money had been used by a Chinese dissident named Wang Yam. As the police started to close in on him, they realised that he had recently left for Switzerland and put a note out on Interpol. Yam had been in the UK for a number of years, claimed to be a grandson of one of Mao’s closest aides, had been divorced, been made bankrupt and sailed fairly close to the law with some of his financial arrangements.

He was arrested in Switzerland and escorted back to the UK where he was arrested for the murder of Allan Chappelow. He made history in his trial though, as it was the first in to be held ‘in camera’: closed, carefully controlled, secret, unheard of in modern Britain. But there were certain things about this that didn’t add up and there was no DNA evidence to place him a the scene of the crime.

It was a case that had intrigued Thomas Harding for a long time. He knew the area well, having grown up just around the corner from the deceased’s home. But investigating this case came with onerous obligations; the court order would stop him and many others speculating about any of the details of the case or they would be in contempt of court.

I thought that this was a really good book about a relatively recent case that is not as straightforward as it sounds. The research is meticulous and he writes with a very strong narrative as he peers into the murky aspects of the case. If you like true crime, this is worth reading.