Bodie On The Road by Belinda Jones 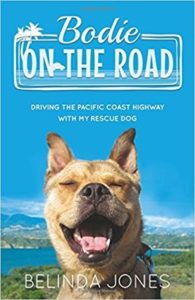 Belinda was distraught, her boyfriend at the time, Nathan, had chosen his career in the US Navy over their relationship. Bodie was in a worse predicament though. Abandoned by his owner if he was not rehomed very soon then the animal shelter would have to euthanise him. Belinda didn’t think she could get any lower. They say that you should not rush into another relationship after a breakup and the same rules apply when getting a dog, but she needed some company. When applying online she had four options to say why she wanted a dog:

She thought long and hard before making her selection. However, she felt that she needed to try and turn this around and this was why she was standing in front of Bodie’s cage. All that was needed was a home visit and it was arranged for a few days later, and suddenly he was her responsibility.

It took a little while to get used to having a dog around the house as well as getting into the routine needed. She became really good friends with Molly and her dog, Winnie. The only problem was just as it happened she found out that Molly was moving to Portland, Oregon and she invited her to her home after she had settled in. A road trip seemed in order and it seemed the perfect opportunity to drop in at some doggy themed stops on the way.

It is a beautiful coastline to travel along and take in the views of the Pacific. Bodie is a gentle, friendly dog. And as well as a trip to see their friend, it is primarily a journey of discovery for them both, where their limits are and how they can fit in with each other. Letting him off the lead for the first time was a nerve-wracking experience. She manages to find hotels that accept dogs and begins to take the steps that she needs to get over her previous relationship, which she mostly does. Except on the way back home, the phone rung, and as she was busy doing something else, didn’t look at the caller. It was Nathan and he wanted to meet up again…

This is more of a personal memoir with an element of travel. You are not going to discover anything profound about this part of the world, rather it is a feel-good type of book. It is written in a chatty and upbeat style with some amusing anecdotes. Jones is honest with her feelings throughout the book, telling it just how it is. If you have read Me, My Bike and a Street Dog Called Lucy then this would be one you’d like.