Confessions of a Bookseller by Shaun Bythell 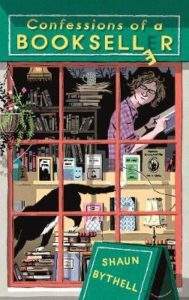 It sounds perfect, a mile of bookshelves, 100,000 books to choose from, open fires, a bookshop cat and when you have selected your purchases then you can take a walk down to the sea to sit and read them. This place can be found in Scotland’s book town, Wigtown, and if you were a visitor you’d hope that the proprietor, Shawn Bythell would be pleased to see every customer who walked in the door. Well, he is, sometimes, but he often isn’t…

“Do you have a list of your books, or do I just have to stare at them?”

Inundated with requests from customers that range from the regular requests for a particular copy of a book, people wanting to take selfies with the kindle to the slightly strange and often the outright bizarre requests from customers who really are not engaging their brains before opening their mouths. He also has to battle with those that think nothing of selecting a number of books off the shelf, coming up to the counter and then offering a paltry sum for the books that they want. No one would think of doing that in any other shop, so why should he be different.

He is still buying collections of books, from people who think that their value is far and above what he is prepared to pay. And every now and again he finds a gem of a book in those collections, however, I never cease to be amazed just how many he takes to be pulped. He lists the book via Amazon and Abe books, and while I can see that if a book listed will get snapped up, he frequently gets a book in the day after someone has asked for it…

Amazon is the bane of his life. The Monsoon system that they have to use to sell through Amazon seems not to work most of the time. They don’t get the orders, so, therefore, have no way of knowing what to ship and the customer rightly complains that they haven’t had the book yet. It makes the shop look bad, even though they are not at fault in any way and Amazon berates them and holds onto their money for longer.

On top of all that he has to cope with belligerent staff, one of whom has a unique way of stacking the books on the shelves and around the shop and he is assisted by an Italian lady who is working for free but gets board and lodgings. His home fills up with people during the festival, bits of the wall fall off the building and he has a few hangovers to cope with. I thought that this was a really good follow up to his first book, Diary of a Bookseller. It is hilarious at times and occasionally quite melancholy. He is not afraid to talk about the problems facing those in the new and second-hand book trade and the massive problems caused by Amazon. I liked the way that he shows his daily takings and the books ordered online compared to those found. So go missing because of customers and others because of erratic filing… Somehow through all of this he manages to only be slightly sarcastic some of the time, exasperated most of the time and I have this sneaky feeling that he wouldn’t be anywhere else.