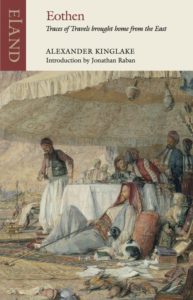 It is almost 200 years since William Kinglake went travelling about the Ottoman Empire on the Balkan fringes before heading to Constantinople, Smyrna, Cyprus, Jerusalem, Cairo and Damascus. It is a world that has changed irrevocably since then; however, there are elements of that world still visible in ours. This almost wasn’t a book either, Kinglake had scribbled a few notes down on the back of a map for a friend who was considering taking a year off to travel too. Seven years later he had written this book.

This is not really about the places that he travels through on his journey. It is more about the people that he meets of his travels and his experiences which were quite varied from charging across a desert alone on a camel, being in a city whose population is dropping like flies with the plague, meets with an ex-pat called Lady Hester Stanhope, that knew his mother, see the Pyramids for the first time and marvels at the Sphinx.

This is the time when there are no cars or other mechanised transport so the art of travelling is a much drawn-out process. The language is quite different from our modern phrasing, but then it was written over 150 years ago. It took me a few chapters of the book to get into his style, but when he reached the desert I found that the writing was vastly better. He is a strange character in lots of ways, he has some respect for some of the people that he meets and for others, he can be quite condescending to the people he is travelling with as companions and those that he has employed to help him. Even though some of his attitudes are very alien from a modern perspective, I did like this and I can see why it is seen as a classic of travel writing.