Epitaph for the Ash by Lisa Samson 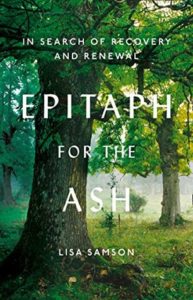 First, it was the elms, ravaged by Dutch Elm disease their magnificent frames that had punctuated the British countryside, vanished. Now it is the turn of another of our trees that hols a special place if our woodlands; the Ash. These trees are being ravaged by Chalara fraxinea or ash dieback.

The disease was first seen in Poland in the early 1990s and moved across the continent before being spotted in the UK in 2012 in a nursery and a year later was spotted in the wild in the UK. The spores travel easily in the wind and it has spread across the countryside, killing small trees completely and affecting larger trees significantly. It is thought that it will affect all ash trees in the end. There are a few glimmers of hope though, some trees are less affected than others and these are being used to breed resistant specimens.

Way back in 1978, Gerald Wilkinson wrote Epitaph for the Elm, a eulogy to the tree and his niece thought that with what was happening to the ash, she would write a book with a similar premise and that is why we have this book. Her journey around the UK will take her from the aptly named, Ashwellthorpe, the first place the disease was found to ancient forests in Scotland, a visit to Hardy’s Ash and Wenlock Edge to see the ash trees there before the spores blow over. As well as the visits to the notable copse’s of ash, there are cultural and folklore elements to the book too.

Part of the way through writing this book, Samson is diagnosed with a brain tumour. When it was diagnosed, she realised that it explained a lot of the symptoms that she had been suffering from. She came very close to death and even had to stop writing for a long period of time before she was well enough to begin travelling and writing again. Part of this book is about her battle with her tumour but does not take over the narrative, rather it adds a small, but no less significant parallel story, as she fights her own personal battle as the trees succumb to the disease.

Her illness knocked her for six and on the later trips, she is much less mobile and is often accompanied by her husband. I really liked her gentle style of writing, it has a certain amount of anger at the loss of these trees to a disease that could have kept out of the country. The ash coppices are there to comfort her and she uses them for healing and to bring her peace. I can also recommend, The Ash Tree by Oliver Rackham and The Man Who Made Things out of Trees by Robert Penn is a book to read to see the number of different objects that can be produced by a single tree if you’re wanting to find out more about these trees.