Journeys in the Wild by Gavin Thurston 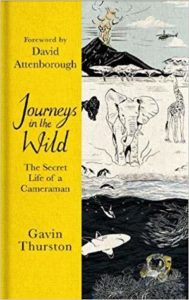 There can’t be many people who have not seen one of the BBC’s masterpieces in wildlife documentaries. The gravitas of Sir David Attenborough helps, but what really makes them special, for me at least, is the photography. One of the guys behind the lenses and screens is Gavin Thurston. It is a job that he been doing for over three decades and he is probably one of the best in the world at it. Keeping solvent at the beginning of his career was like walking a tightrope. Thankfully he was saved from debt by a lucky break where he was offered a chance to film an advert. The money from that kept him solvent and meant that he didn’t need to sell his gear and deprive himself of an income.

His list of filming achievements is pretty long, but he has also been lucky too. The films he was making were a success. He has been lucky too, not only has he seen and filmed some of the greatest wildlife moments but it has taken him to the most beautiful parts of the globe. It is not all luxury hotels and five-star service though, as to get that defining shot for a programme, involves sitting up trees covered in bees for hours at a time, got very wet and sunburnt on innumerable occasions, has frozen his arse off at the poles and nearly dying several times, including a tribesman killing a snake as it was coming up behind him.

Thought this was a great book with an insight into the life of a cameraman. I really liked the diary format where he has selected the best entries from the various trips he has had all over the planet. In amongst the exciting and mundane, there are several laugh out loud moments. He has seen some amazing things, and been to every continent and even 1000m to the bottom of the sea.