Limits of the Known by David Roberts 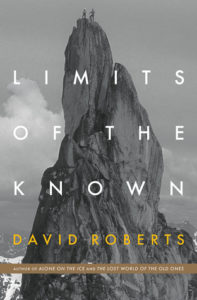 There are people around that revel in climbing the tallest mountains, seeking out the wildest places and pushing their bodies to extremes. David Roberts was one of those people who was always seeking the next place, another mountain all because he could. He never considered himself a risk-taker though, more of a risk manager, as he knew the absolute limit of what he could achieve and never pushed himself over that line. His outlook on life all changed though with his diagnosis of throat cancer. Gone were the days of scaling the peaks and he had to take time out to be treated and to rest and recuperate.

The sudden expanse of spare time that he had meant that he could consider whys and wherefores as to why he undertook adventures and also made him think about other people who have sought the perils of extreme travels. These days we are not cut off from civilisation, our technology can pinpoint our exact spot in the globe and we are only a phone call away from help should things become sticky. That said becoming too dependent on it can be lethal. It feels that there are no more blank spaces on the maps anymore; even 100 years ago there were parts of the North American continent that had never had humans walk or climb over them.

Restricted because of his health, the journeys in this book are literal and historical. Not only does he reminisce on the highlights and the close calls that he had in his own adventures all of the globe, but he writes about adventures that he admires, such as Henry Worsley’s epic walk across Antarctica, Norwegian explorer Fridtjof Nansen who managed to get closer to the North Pole than anyone else before him and British explorer Eric Shipton who was the first to see some of Alaska before it appeared on a map. There are modern adventures in here too, people who have turned away from the much-photographed and mapped surface and headed underground, deep deep underground to discover about those who push their limits right to the limit when cave diving.

Roberts asks some interesting questions, about the need for humanity to seek the places that have never glimpsed directly by our eyes and what drives these people to do these things. He goes some way to answer them too, by considering his take on adventures and his attitude to risk even after losing climbing partners to falls. This is the first of his books that I have read. I really liked his writing style, detailed and yet concise and will definitely be reading some more of his books.

For Love & Money by Jonathan Raban