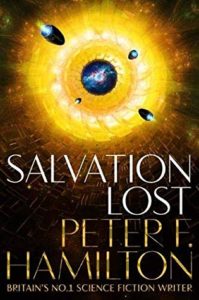 Life in the mid 23rd Century is the closest that humanity has got to a utopia, energy is pretty much free because of the quantum entangled portals and it has enabled mass transportation to almost anywhere. That comfortable life is about to come to an end as a threat of epic proportions has just been discovered. Feriton Kane’s investigative team has discovered that the supposedly benign Olyix race are heading to Earth.

They plan to harvest humanity, in order to carry us to their god at the end of the universe. It is the worst threat ever to face mankind and there is almost no time to fight back. As the Olyix ship appears it opens a portal and thousands of ship pour through with one aim in mind. Humanity could be wiped from the face of the universe; they have a choice; stay and fight, or flee out among the stars.

When I read the first in the series, Salvation, about this time last year, I thought it was a fast-paced and well-conceived sci-fi thriller. This builds on all the elements that he put in place in that first book but doesn’t have the relentless pace of the previous book. The plot is more subtle, with subplots that weave around the main thread and slowly are drawn in but the gravity of the ending. I did feel that it took a lot longer to get going than the first in the series, but then that hit the ground running.

His world-building of the habitats that humanity now live it and a futuristic London and other major cities that are preparing for the worst on Earth is really special. I also liked the space battles too, they just felt really plausible and are really well written. I thought that it concluded fairly well, but it suffers from a little of those middle book blues where a lot of the plot is unresolved and left open. That said, there is the third book coming that should resolve all these threads and I am really looking forward to it.