The Almighty Dollar by Dharshini David 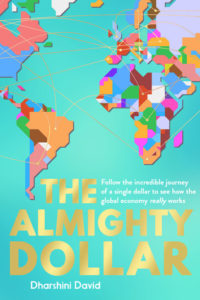 Money makes the world go round, supposedly. It doesn’t, that is physics. However, it has become the lifeblood of our modern world. Each day vast quantities of money flow back and forth around the world as city traders and more often than not now days, computers try and get that edge to squeeze that profit from each transaction. The majority of the money that flows from country to country each day is dollars. The greenback has become the global currency.

But how did the dollar reach this point? Why do prices keep going up? How come we have more disposable income than previous generations and yet can’t afford a house? To answer these questions and many others, economist Dharshini David, follows the path of a single dollar from the moment it is spent in a superstore in America to its part in the growing Chinese economy. From there we will follow it to Africa, India, the Middle East and Europe before it wends its way back to its home country. Each transaction is used to show how the money moves across the world, being part of legitimate and sometimes not so legal transactions.

Through this fictionalised account of a single dollar (and a guest appearance by the Euro), David is able to show where and how the money has pure power and leverage, where people are struggling to survive and where the people are that have more money than they can ever spend. Our interlinked global system has lots of positive benefits, but there are many negative ones too. Because of this close linking of economies, if there is a crash, then there is a domino effect as a collapse in one part of the global economy is rapidly transmitted around the world to other vulnerable states.

Even though economics affects everyone of us on the planet to a greater or lesser extent, most people tend to ignore it; it is not called the dismal science for no reason at all. This book is a way of trying to get people to see that it is important and that a lot of the principles are fairly straightforward to understand. It helps because of David’s writing, but the idea of following that single dollar works really well. Overall I liked this book, it doesn’t go into much depth, but that is not really going to happen in a book this short. However, if you feel the need to read more about the subject, then a reading list has been provided.