The Ash Tree by Oliver Rackham 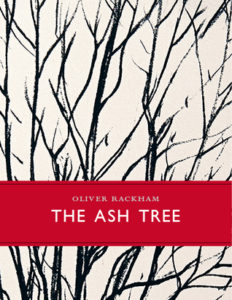 Even though Ash got into the top ten of trees in a survey a couple of years ago, it is not the one that springs to mind for a lot of people. This is why you often find books and prose on the magnificent oak, beech, elm and yew. We don’t as much take them for granted, rather the ash is not visible in our day to days lives, so we tend to never think of it. It has been one of the most common trees, but with the arrival of Ash dieback, this could all change in the coming years.

The tree has a number of qualities that have made this an appealing tree to use since way back in the Neolithic time. It can be coppiced and pollarded and because of its versatility, ash has been used for tool handles, bowls, fodder for livestock, to warm our homes and you can even find it on the back of a Morris Minor Traveller. It is very rarely used in construction. An ash will support a number of species, hosting bats, lichens, and the bark even is a food for all sorts of animals and there are a lot of plants growing in the ground under the trees. In 2012 the first case of dieback appeared in the UK; it was inevitable as it had been tracked across Europe for a number of years, but it has the potential of killing all the ash trees in the country.

Rackham’s book covers all sorts of information about the uses of ash over the past millennia, as well as lots of detail on the disease that they are starting to succumb to. The greater threat though is from the Emerald Ash Borer, another insect that has been brought in to the UK as a side effect of the globalisation and international trade. He writes in a matter of fact style that belies that amount of research that has gone into the detail in the book, but his plea to those that read this book is that we take proper precautions to restrict items that are moved around the globe without any care for the possible damage and also that we start taking the protection of woodlands seriously.