The Country of Larks by Gail Simmons 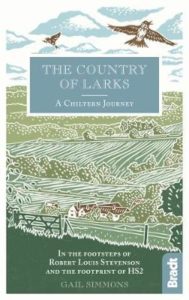 Back in 1874, a young man called Stevenson walked from High Wycombe in Buckinghamshire to Tring in Hertfordshire across the Chiltern Hills over the course of three days. He wrote up his walk in an essay called Beechwoods. Ten years later he was writing a book called Treasure Island and would become famous for that and other works. He was a keen observer of the natural world, listening to the chorus of birds. This landscape, whilst being shaped by human touch, was still rich in abundant flora and fauna. People co-existed with the land rather than obliterate it into submission.

A century and a half later Gail Simmons decided to follow in his footsteps tracing the changes in the landscape since Stevenson first walked there. But it was also a time to take stock of the countryside before the ancient woodlands, historical monuments and drovers roads that will be obliterated soon by the pointless and controversial High Speed 2 (HS2) rail line that will smash through here soon.

It is also a walk down memory lane too, as this was the part of the country that her parents moved too after her father finished serving in the army and it was where she grew up. But even though she was familiar with it, there had been significant changes since that time, whole woodlands flattened to build on and villages that were once separate were now surrounded by the urban sprawl. Her walk takes her through villages that are now part of the commuter belt, where private roads with expensive price tags and driveways full of executive cars seem to be taking over. The juxtaposition between sleepy village greens where the cricket match is being played and walking past fields with PRIVATE KEEP OUT signs does jar a little.

I read this book knowing that HS2 had been given the go-ahead by the government. It is already way over budget, and that it set to escalate as they squander ridiculous sums of money of a train service that we don’t need. For the nominal extra expense in the total budget, a tunnel under this part of the country would still be the best solution. The project is a big white elephant, but sadly this government thinks that it will be useful. This was an enjoyable book to read, Simmons has a quite beautiful way of writing, and this book is a wonderful eulogy to the landscapes and woodlands that will be lost. There is so much crammed in here for a three-day walk (plus a little bit) and I’d thought she would be more furious about losing all this countryside. However, what comes across is more pain and anguish over what is going. When it has gone then it is lost forever. I liked that they had included Stephenson’s original essay at the back of the book and as a nice little touch, I thought the dictionary definitions that are liberally scatted throughout the book on all manner of country words and phrases worked well too.

The Secret DJ by Anonymous