The Edge of the World by Michael Pye 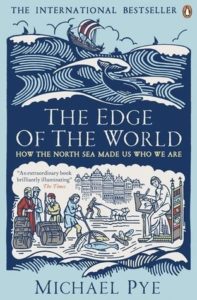 Different regions of Europe have had power, from the Egyptians, the Greeks and Persians and Romans. But around 1000 years ago that focus of power moved from the Mediterranean area to the small shallow sea in between Britain and Europe, the North Sea.

The region had been conquered by the Romans 2000 years ago, but after they left it became a bit of a backwater. It changed as the people who lived on the shores came to master boat building, setting off on voyages far beyond the small limits of the North Sea to discover lands across the vast Atlantic Ocean.

Some of the seafarers bought terror to some places, we all know about the Vikings and their raids on coastal villages and monasteries, but slowly peaceful trade took over. Ideas and goods began to move back and forth across the waters, populations moved and settled, they adapted to change fairly quickly and the whole region thrived.

Pye looks at the history of this region through various subjects, money, fashion, nature and science to name a few, and teases out various stories and anecdotes to demonstrate his case. Wide-ranging though it might be, it sadly didn’t live up to expectations for me. Splitting it by theme meant that you were jumping backwards and forwards and from place to place. For me, concentrating on specific historical periods would have been better as it did feel that it was jumping around too much from period to period.

Ghost in the Reflection: Letters to Erin by Jim Miller