The Nature Of Spring by Jim Crumley 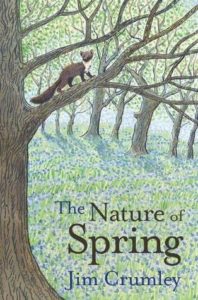 Regardless of what happens in the world, the seasons come and go without fail. The seasons may be stretched a little, especially with the effects of climate change at the moment as they seem to blend into each other more and more. With spring the main moment for me is when we reach the equinox, that day when the night and day are exactly the same length; 12 hours. This year that day was the 20th March and that seemed to me to be the best time to start this book by Crumley.

Spring in Scotland often begins with snow on the ground and in his first chapter of the book he is watching a kestrel over a landscape that is scattered with small patches of snow. She drops from the twig into the wind and begins to hunt. They keep pace with each other at a distance and just as he reached some newly planted native trees, she turns and rushes away downwind. Soon after he hears a mistle thrush singing as the urge to find a mate becomes all-consuming. These are what he considers the first syllables of spring.

Following the traces of spring around Scotland will take him up in the Highlands, and to the islands of Mull, Iona, Lismore and he even ventures out of Scotland to visit Lindisfarne on the Northumbrian coast. If feels like you are alongside him as he is watching the antics of Sea Eagles or spotting an unusual encounter between a fox and a pine marten or being a handful of yards away from a grey coated roebuck.

As with his other books in the series, this is another brilliant book from Crumley. He is passionate about his subjects too; his eye for the details of the way that the creatures behave, coupled with the descriptions of the landscape make this such a good book. He is not afraid to use the book as a soapbox either, putting forward solid arguments on a variety of subjects that he cares about. This is the third in the series so far, and there is just the final book, The Nature of Summer, to look forward to.

Other books on Spring that I can recommend:

In Pursuit of Spring by Edward Thomas

Walking through Spring: An English Journey by Graham Hoyland

Spring: An Anthology for the Changing Seasons by Melissa Harrison (Editor)

The Long Spring: Tracking the Arrival of Spring Through Europe by Laurence Rose