The Twelve Birds of Christmas by Stephen Moss 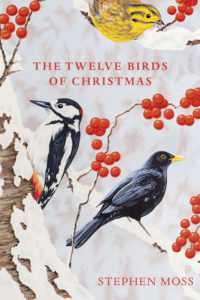 Most people know the carol, Twelve Days of Christmas with it’s rather exuberant and expensive gift list from one lover to another. Six of the gifts given are birds, from the partridge at the beginning of the song, to the swans, midway through. However, Stephen Moss wondered if the other gifts were also birds and set about researching into the possible species that could represent the remaining gifts.

For example, for the present of Five Gold Rings, he has discovered that the Yellowhammer has an old Scottish folk-name of ‘yoldring’. It is this and similar corruptions to our language that have meant that he has been able to take an educated guess as to what the other birds might have been in the song. So for twelve drummers drumming he has chosen woodpeckers and for ten lords a-leaping, cranes were chosen.

This is another well-written book from one of our top nature writers in the country. I liked the way that he has used a little artistic licence to pick a suitable bird for the non-avian related gifts in the song. The logic behind these choices is clearly explained and the way that he uses anecdotes from folklore and history to expand on his chosen bird for each line in the song. A great little book which would suit anyone with an interest in nature or wants a Christmas themed book with a little more depth.