The Wood by John Stewart Collins 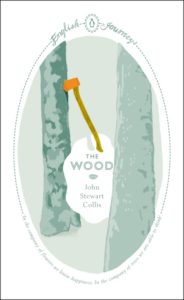 John Stewart Collins is best known for his book, The Worm Forgives the Plough, which is an account of his time spent working as a farm labourer in the Land Army in Sussex and Dorset. Whilst in Tarrant Hinton, Dorset he was asked to clear and thin an ash wood using only an axe and bill hook.

It was while undertaking these simple and repetitive tasks that he considered the wood around him in the context of the natural world and how being outside daily meant that you could sense the imperceptible change of the seasons throughout the year.

This short volume is an extract from The Worm Forgives the Plough with a focus on the woodland work. I really enjoyed this, as he writes in a very gentle way, enjoying the manual labour while bringing the woodland back to some semblance of order, but his perception of what is happening around his is razor-sharp. Must read his other book at some point.