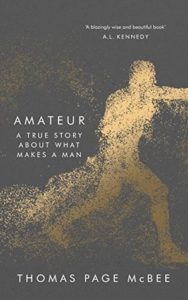 In his training for the fight in a charity match at Madison Square Garden, McBee joined the Church Boxing Gym. It is in downtown Manhattan and in underground down several flights of stairs. There are several rings in the room and it is covered with posters of fighters long forgotten.  It is a place that oozes testosterone, echoes to the sound of people working out and sparring and the aroma of stale sweat permeates the place.

Mangual and the other guys training him admired his energy and enthusiasm and were fully behind him for this match. Thomas Page McBee was learning how to punch, how to get hit, when to defend and when to strike. Every time he entered the ring he learnt a little more about what makes a man, what makes them resort to a physical way of dealing with issues and why some sorts of masculinity were toxic. But McBee had not been completely open with those training him; when they said he had balls facing the other guys in the ring, it turns out that he didn’t.

Because McBee was trans.  After a lifetime of being, but not feeling female and having had surgery and testosterone and hormones that he started at the age of 30, he finally got a new birth certificate at the age of 31 declaring the sex he always knew he was. But there is more depth to this book than just his personal journey across the gender divide. He uses it to ask wider questions as to why men are as they are, how women’s perception of him changed and how culture and stereotypes should not always define who we are or who we aim to be.